“Pumpkin”, a 3-year-old female Domestic ShortHair cat was diagnosed w/ Feline Infectious Peritonitis (FIP), based on antibody testing, in December 2015.  She was severely anemic and this resulted in very pale gums (almost white), lethargy and a tendency to eat clay cat litter and lick at the cement in the backyard.  In addition, she was drinking and urinating excessively.  The good news was that she was still eating.

We used Acupoint Energy Testing in order to obtain more diagnostic information.   We confirmed that the FIP virus was indeed present; we found it in the thymus gland (part of the immune system, important in the production of T-cells) as well as the brain and liver.  Her T-cell count was very low, meaning that her immune system was severely compromised.   We found Round-up and Dicamba (2 commonly used herbicides used extensively, especially associated with GMO crops) along with 5 other chemicals in the thymus, liver and brain.  Round-up toxicity results in disruption of the GI flora and mineral deficiency.  Both Round-up and Dicamba contribute to immune compromise.   Interestingly, both chemicals were present in the bone marrow, and suspected as the cause of the anemia.  In order to find the source of the chemicals that were making her sick, we tested her drinking water and found all 7 of the chemicals.  These chemicals can also be found in food and in the air. 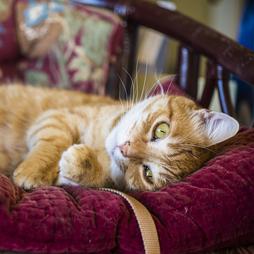 Her treatment protocol included clean water and clean food along with probiotics, minerals, detox and immune support.   We replaced the clay litter with a grain-based litter so she wouldn’t ingest more clay.   She was also given a homeopathic remedy that best fit her symptoms.

Over the next 2 weeks, there was some improvement in her energy.   On retesting, the chemical levels and the viral count were significantly reduced (better).  We continued treatment with small modifications based on the clinical response and test results.  Her energy was normal by mid- January and her appetite was good.   She was still licking the concrete and drinking too much water.  Her gums were more pink but not normal.  The FIP virus was completely gone by March but a blood test revealed that she was still anemic.   Acupoint Energy testing revealed persistence of Round-up and Dicamba in spite of ongoing detox therapy, suggesting that she was still being exposed to them.   We found the chemicals in the concrete that she kept licking.  After confining her to the house to eliminate exposure to the chemicals in the cement, the anemia completely resolved. The excessive thirst and urination was a result of hidden (deeply embedded and previously undetectable) Round-up and a bacterial infection of the bladder.  These symptoms resolved with nutritional therapy.