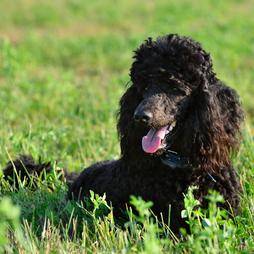 “Cosmo” was 18 months old when I first met him.  Though he was a well-adjusted puppy when adopted, he became skittish and over-reactive to noise and objects at 8 months of age.  After he was castrated at 1 year of age, the skittishness increased and he developed separation anxiety to the extent that he became destructive when left alone in the house.  There was a further escalation of symptoms after his “booster” vaccines a few months later.  Other important symptoms included intermittent diarrhea with mucus and straining, and a history of painful ear infections that had been palliated with ear medicines.  He was sociable and friendly with people but could be submissive with other dogs.  A brief exam via Acupoint Energy Testing revealed moderate radiation toxicity, which is known to contribute to anxiety.

“Cosmo” was given a single dose of a homeopathic remedy that fit his particular symptoms (fear of being alone, skittishness that exacerbated after castration and after vaccination, painful ear infections and diarrhea).   In addition he was switched to a better quality diet and given a nerve-protection supplement. A month later, the fear of abandonment had resolved and the anxiety was much better.  There had been only one episode of diarrhea.   One year later, there were no symptoms.   He still needed the nerve support supplement because of ongoing exposure to wireless radiation.