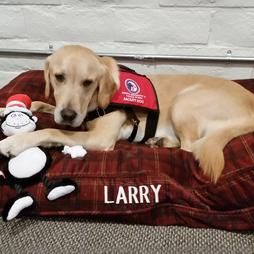 He had lived with an unknown number of families before being adopted in December 2015.  He had had a variety of gastrointestinal symptoms since then but in June they became quite severe: frequent vomiting, nausea, bloody diarrhea and loss of appetite.  He was treated conventionally, with antibiotics, anti-emetics, etc.   Within days, he developed hives, edema and itching and then a skin infection.  The drug that was identified as the probable cause was stopped and he was given steroids to control the hives and itch.

When I met Larry in mid-July, his energy was low and he was 8 lbs. underweight.  The vomiting had stopped but he still had diarrhea (though no longer bloody) and he was still itchy.   Acupoint Energy Testing revealed food sensitivities (a result of GMO damage to the gut):  he was especially sensitive to chicken.  He also had a bacterial infection (Raoutella planticola) in the intestines, stomach and liver.  We found Round-up as well, and this is the probable cause of the dysbiosis (disruption of the GI flora) and vitamin/mineral deficiency.   When we tested the water he was drinking, we found the bacteria (Raoutella) and Round-up.

We found clean water for Larry and a cooked food diet that did not contain any chicken or beef.  He went home with a treatment protocol that included probiotics, detox enzymes and immune support.   Within 10 days, his energy had improved but he was having difficulty with commercial foods so we put him on a homemade diet of cooked egg and sweet potato.   The stomach gurgling was reduced and he had gained 4 lbs.   The itching was also better.  Testing revealed that the bacterial infection was almost resolved but we discovered radiation toxicity and Dicamba (another herbicide that is being added to Round-up).   We modified the treatment protocol to account for these findings.  We also suggested ways to reduce radiation exposure (switching from wireless to wired computer use).

In August, there was further improvement in the GI symptoms and energy (90% of normal now).  His stool was formed but excessive (not well digested).   He had gained another pound but was still 2 lbs underweight.   The Raoutella infection was resolved but he now had a new bacterial infection in the intestines (E. coli).  He was healthier in that the bacterial infection did not result in diarrhea but his GI tract was still not strong.  We again modified the treatment protocol.

In September his energy was normal, the stool was formed but excessive and he could only tolerate a few foods.  New research data allowed us to discover hidden (deeply embedded and previously undetectable) Round-up in the kidneys.   This explains why he still had dysbiosis (disruption of the GI flora), mineral deficiency and persistent dietary restrictions.  We changed the treatment protocol in order to pull out this hidden Round-up.   Over the next 2 months we worked to remove the hidden Round-up, restore the GI flora and replenish the minerals, giving his intestines a chance to heal.

We treated another dog in the family, Lucy, because of itching and jaw pain.    Acupoint Energy testing revealed the same bacteria (Raoutella) in her liver, intestines and jaw.  She also had Round-up toxicity and had developed a food sensitivity to chicken.   She was taken off of chicken, treated for the bacterial infection and chemical toxicity (with nutritional therapy).  Her symptoms resolved within 2 months.