we discontinued the eye ointment.    A follow-up consult one month later revealed that the eye symptoms completely resolved within one ​week after the remedy.   Her coat looked better though no other changes had been made.

Moon blindness (so-called because the symptoms seem to recur somewhat regularly) in horses tends to be progressive: it can lead to blindness.  This case was typical in that symptoms did not resolve with the usual treatment, and they flared up again one month later.  After one dose of remedy S, the uveitis completely resolved with no recurrence (as of August 2009).  Thus, the remedy was curative though she may at some point need another dose of her remedy.  I suspect that “Haleakala” is still susceptible to vaccines and so have advised that vaccines be minimized.  Her guardian will run antibody titers before revaccination.

Comment:  Over-vaccination is a serious issue because it contributes to many of the diseases that we see in horses.  “Vaccinosis” has many faces: moon blindness is only one possible manifestation.  Also, different horses with the diagnosis of moon blindness will need different remedies.  Remedy S is not a remedy for moon blindness.  Rather it is the remedy needed by this particular horse because it fit her specific symptom picture.

* These case reports serve to demonstrate the homeopathic process and principles; thus, the remedy name has been omitted.


< Back to Case Reports 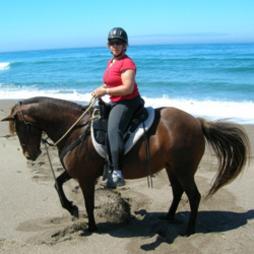 “Moon Blindness” – stopped in its tracks

“Haleakala”, a Rocky Mountain mare (born 12/94), is being used as a pleasure horse though she had been a brood mare prior to her purchase in September 2005.   I was consulted in June 2008 because she developed painful eye inflammation.

The mare had been given 12 vaccines between October 2005 and May 2007.  On April 17, 2008 her left eye was suddenly “bloodshot” and painful and the eyelids were swollen.  The local vet made a diagnosis of uveitis (inflammation of the eye) and administered banamine (an anti-inflammatory drug) and a topical antibiotic eye ointment.  Symptoms subsided but did not completely resolve and on May 25, they flared up again.  This time the vet administered a steroid and prescribed a topical antibiotic/steroid ointment.  When Haleakala’s guardian contacted me on June 9, mild eye symptoms were still present.

My assessment was that the recurrent eye inflammation was a manifestation vaccinosis (disease caused by over-vaccination).  One dose of remedy S* (30c potency) was given (based on her particular symptoms) and